We had a GREAT time at Fun Day!

We have been practising hard for the school Music Concert.

We enjoyed performing When The Saints Go Marching In on tuned percussion.

In Geography we have been looking at maps.

We used the index and grid references in a children's atlas to find lots of different cities, countries and rivers.

In ICT we have been programming Beebots.

We worked in partners and used trial and error to see how close we could get the Beebot to a tower of wooden blocks without knocking it over.

In RE we have been learning about the Ten Commandments.

We worked in groups to create our own list of rules that we thought should be followed by everyone to make the world a safe and happy place.

This week in Science we learned about micro-habitats.

We went on a minibeast hunt to discover the creatures that we could find living in different micro-habitats.

We used magnifying glasses to make careful observations and were respectful of the the creatures that we found.

We had so much fun!

In RE we have been learning about the Call to Prayer.

We thought about times when we have to stop what we are doing to do something important and worked in groups to perform role plays.

As part of Science Day, we became super scientists and explored lots of activities set up by Mrs Chmaissani.

We had so much fun!

In RE this week we found out about the Last Supper.

We then acted out the story.

We thought about the words Jesus said to his disciples and what he meant.

This week in RE we began our half term's work on the Easter story.

We learned about what happened on Palm Sunday, when Jesus rode into Jerusalem on a donkey.

We found out that, although many people were excited and overjoyed to see Jesus, others were not and wanted to get rid of him.

We chose to take on the role of either one of Jesus' supporters, or someone who was against him, and wrote about what we might be thinking and feeling.

Then we used our body language and facial expressions to show how we felt and read out our work.

We painted still life paintings of vases of flowers.

As well as looking carefully at what we were painting, we had to think about how to use the space on the paper and mix all the colours we needed from the three primary colours.

In RE we have been finding out about Passover.

We learnt about why and how Jewish people celebrate this festival, including taking a close look at the Seder Plate of symbolic foods.

In Literacy we have been reading the story Lima's Red Hot Chilli.

We wrote instructions to show Lima how to make a milkshake to cool her mouth down after eating the red hot chilli.

Before writing, we each made a milkshake to help us understand the steps involved.

We enjoyed drinking our milkshakes when we were finished!

In Science we read a poem to help us find out about the different ways that seeds are dispersed.

We enjoyed performing the poem together as a class.

In Maths we have been looking at 2D shapes.

We sorted them in different ways according to their properties and had a go at thinking of some of our own criteria for sorting.

In History we have been finding out about The Great Fire of London.

This week we learnt that Samuel Pepys was an eyewitness to this important event and wrote about it in his diary.

We carried out a hot seating activity and asked Samuel questions about the Great Fire and his diary.

In RE we have been learning about the story of The Annunciation.  We wrote about what the angel Gabriel told Mary and how she responded.  Then we acted it out through role play.

In RE we have begun learning about Mary, the mother of Jesus.

We worked in pairs to create mosaic-style collages of Mary and then reflected on why she is important to Christians, as well as on women in our lives who are special to us and what makes them important.

As part of our work in Science, we read the story Katie Morag Delivers the Mail.  We carried out an investigation to help Kaite Morag find out which material would be the best one for making a mail bag that keeps the letters dry.  We made predictions, observed carefully what happened and then wrote about our findings.

In RE we have been thinking about a rule that is very important in all the major world religions: Do to others as you would have them do to you.

We worked in groups to role play three different situations to show how you could follow this rule.

In Science this week we investigated how we could change the shape of materials by squashing, bending, stretching and twisting them.

We found out that if a material is rigid, it is hard to change its shape.

In maths we have been thinking about the value of the digits in a two-digit number.

We used manipulatives to make the number in lots of different ways, which really helped us to understand what the digits in a number mean. 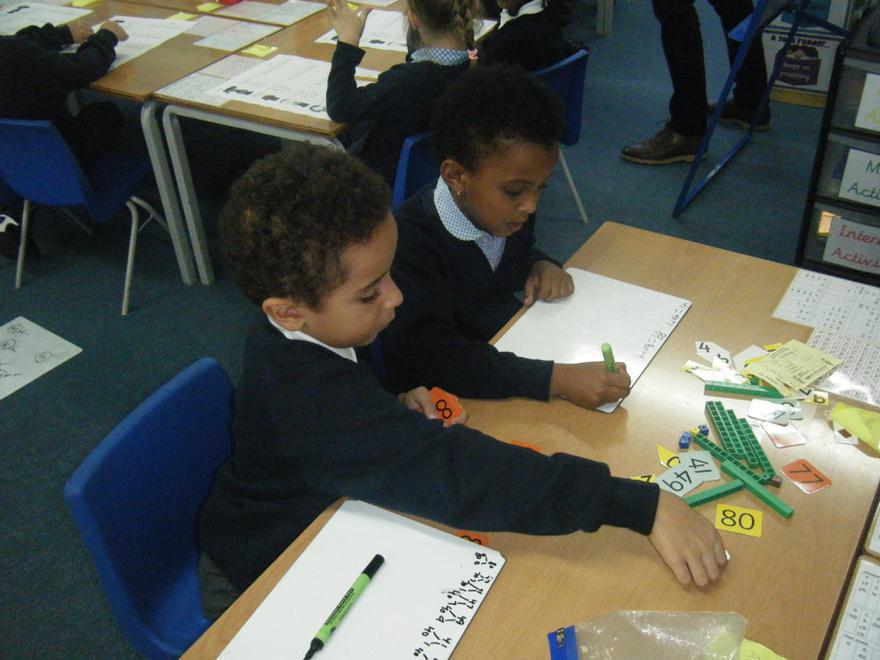 Year 2 have been talking about the Golden Rules. Here you can see how we have personalised them for our class.

Our Science topic this half term is Materials.

We have been busy naming different materials and sorting them.

In Year 2 we have been looking at the Bible.  We found out that the Bible is a very special book and should be treated with respect.  We enjoyed reading some Bible stories and chose our favourites. 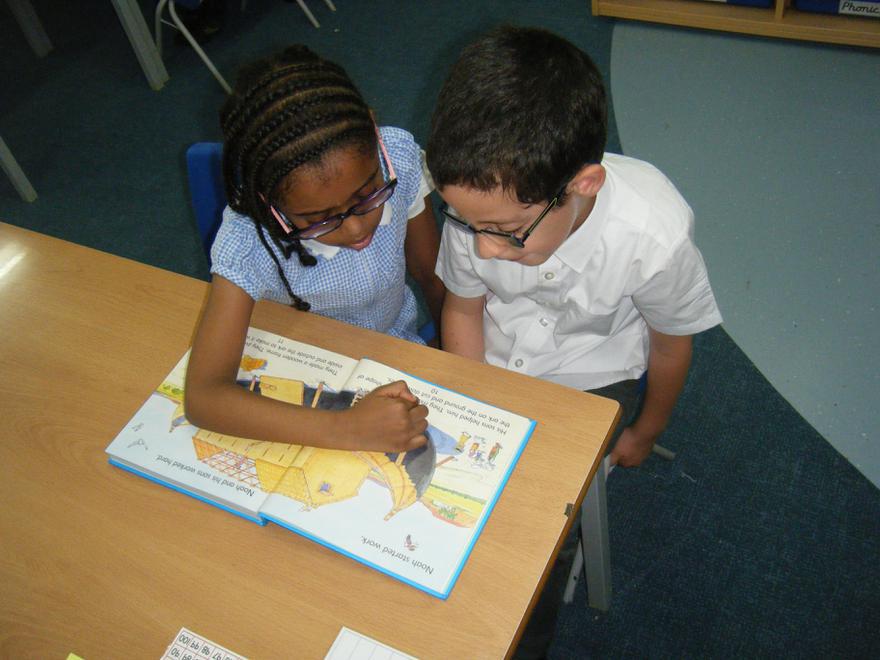 My name is Mr Borman and I would like to welcome you back to a new school year and to our fantastic new building!

Supporting me in class this year will be Mrs Henry, Mrs Ali and Miss Joseph. 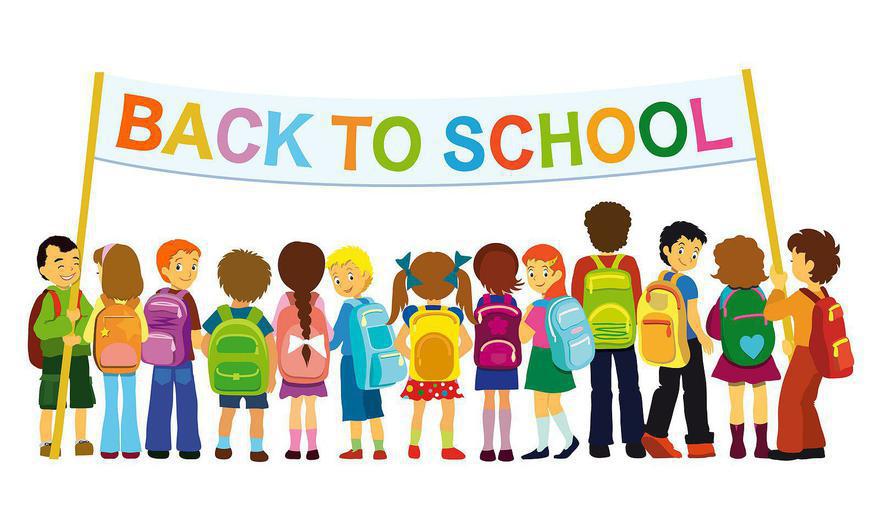 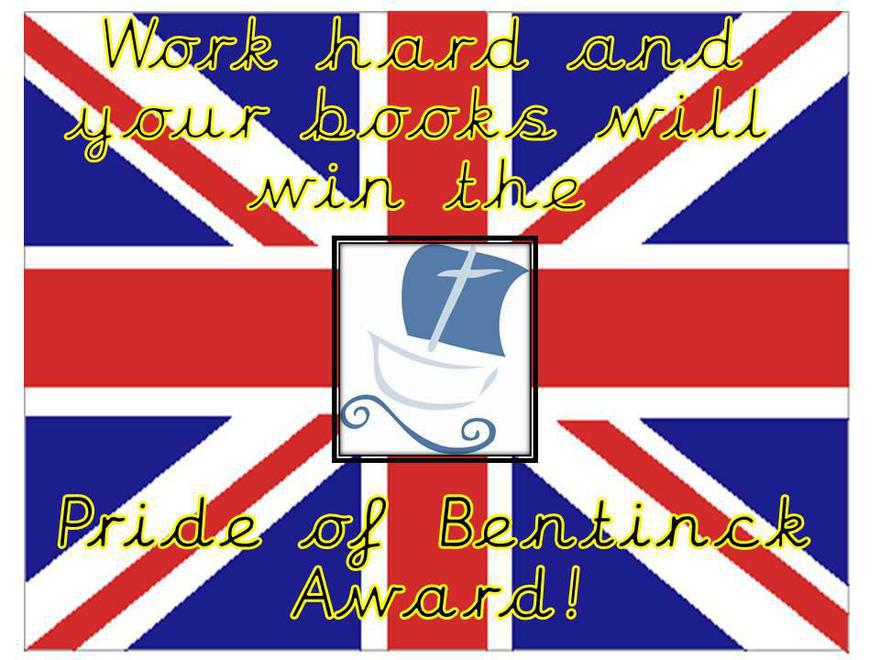